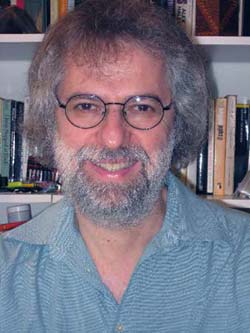 Samuel Zyman is one of today’s leading composers whose music follows traditional formal and developmental practices. Born in Mexico City in 1956, Zyman came to the United States in 1981, and entered the Juilliard School, where he studied with Stanley Wolfe, Roger Sessions, and David Diamond. He is currently a member of the Juilliard faculty. Like Daniel Catán, one of our previously featured composers, Zyman draws upon both his Jewish heritage and his own Mexican nationality. However, most of his music pursues an international, classically-oriented neo-romanticism, characterized by a driving rhythmic vitality, as well by as a haunting lyricism. Zyman has composed symphonies, concertos, a string quartet, and other chamber and vocal music. A recent highly-publicized success is the music he wrote for the award-winning film La Otra Conquista, which concerns the 16th-century conquest of the Aztecs by Hernando Cortés and his small army. The theme music for the film is a song called “Mater Aeterna,” which can be heard in a performance by Plácido Domingo on YouTube