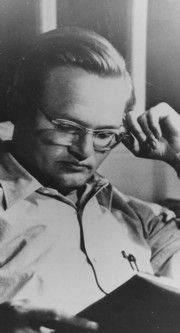 Robert Kurka was born in Illinois in 1921, a member of the generation that created the great American symphonic repertoire of the 1950s. However, Kurka’s contribution was cut short by leukemia, which ended his life in 1957, just as his work was beginning to gain recognition. Although he is probably best known for his opera, The Good Soldier Schweik, which he completed shortly before his death, his orchestral and chamber works reveal distinctive qualities of their own.

Kurka is one of those composers with such a strongly individual voice that his music is instantly recognizable as his own. The most obvious influence on his style is Prokofiev, whose musical fingerprints are often clearly apparent. However, equally obvious is Kurka’s fascination with clashing major- and minor-thirds, which gives his music a distinctly American sound, and has led some commentators to describe his style as “jazz-influenced.” However, there is an obsessive quality to Kurka’s attraction to this modal ambiguity that makes it seem more personal than just a “national” trait. Take these two factors and distill them into the brash, rhythmically vigorous, exuberantly optimistic but poignantly nostalgic generic language of American symphonic music of the 1950s and you have a good idea of “the Kurka sound”—except for one ineffable element: a characteristic melodic/harmonic synthesis, startling at first encounter but unforgettable forever after, giving the music real “personality.” (It’s a funny thing, this “personality” business: some composers go to great lengths to devise their own “style” with little success, while another can jump right into the language of a better-known predecessor, yet create a unique identity in spite of himself.)

The brief excerpt available below offers a representative example of Kurka’s unique “sound”: