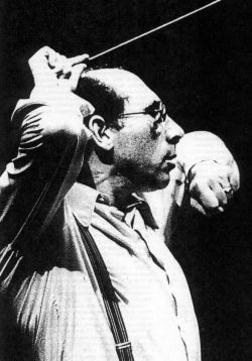 Arguably Portugal’s greatest 20th-century composer, Joly Braga Santos was born in Lisbon in 1924 and died there in 1988, at the age of 64. Although he did not enjoy a long life, he was a prolific composer, with three operas, six symphonies, and numerous concertos and other works to his credit. Although during his lifetime his music was not widely known outside Portugal, since his death all six of his symphonies—the first four of which were completed by the time he was 27—and many of his other works have been recorded, spreading his name and work internationally. Critical and listener response to these recordings has been little short of sensational. (See recordings on Amazon.)

The music of Braga Santos falls into two creative phases: the first, lasting until around 1960, the second beginning several years later, after a period of reflection during which he suspended creative activity. The music from the prolific first period is characterized by a distinctive, instantly recognizable melodic thrust—modal and largely diatonic within a consonant harmonic context. While these works may be criticized for an excess of fervor, their distinctive appeal is undeniable. Listeners who enjoy the tone poems of Respighi, the symphonies of Howard Hanson, or the filmscores of Miklós Rózsa are very likely to appreciate the early music of Braga Santos. The music of his second phase tends to be tighter, with a more severely Neo-Classical language. Though this later music may display more polish and sophistication, much of it lacks the remarkable flair and personality of the earlier music.